We are honoured that the concert will be given by two local musicians, husband and wife team Jamie Akers and Susana de Oliveira.

Susana sings in our Parish Choir, and Jamie joins us when he has a gap in his hectic international concert schedule, playing lute and guitar around the world.

Jamie has recently made a well-received CD of music by women composers. He will be playing some of this repertoire in the concert at Ewell.

Jamie and Susana will also be performing music with a local connection, pieces associated with Henry VIII’s great Nonsuch Palace.

This will be a fabulous concert and one not to be missed.

Susana de Oliveira is from Lisbon. She studied at Trinity Laban College
of Music in London. A wonderful mezzo soprano, she specialises in
music of the Renaissance and Baroque periods. She is also an Alexander Technique therapist.

Critically acclaimed musician Jamie Akers was hailed as ‘the great
Scottish guitarist’ by Classical Guitar Magazine and, in a review from
Gramophone, his playing was described as, ‘containing all the warmth,
colour and expressive richness one could hope for.’ Throughout a varied career, Jamie has explored various genres of music from a historical and stylistic perspective, combining diligent research with expressive playing to communicate the continuity of musical endeavour through the centuries.

‘A superb player’
The Independent

‘all the warmth, colour and expressive richness one could hope for’
Gramophone

‘Sensitive accompanying….Akers’ nimble playing showed the intricacies
of the music as he subtly shifted the moods and tempi’
The Herald

‘Bravo the prolific Scottish guitarist James ‘Jamie’ Akers for shining a light on three 19th century women composers on his fantastic new album: Emilia Giuliani (1813–1850), Athénaïs Paulian (1802–c. 1875), and Catharina Pratten (a.k.a Madame Sydney Pratten. I knew nothing about any of them (though I’d heard of Giuliani and Pratten) and I came away extremely impressed. In his fascinating and provocative liner notes essay, Akers notes that while the three composers suffered the adversity of being women in a male-dominated world and thus overlooked and “rarely championed or performed. . . to say these women lived lives devoid of appreciation is to do an injustice to their times. Madame Sydney Pratten toured Europe as a child prodigy, was well known in English society, and was the subject of a glowing biography. Athénaïs Paulian was a friend of many of the leading guitarists of the day and a dedicatee of numerous works; while Emilia Giuliani shared the stage with Franz Liszt and was judged his equal by audience and critics alike.” But it is also true that eight of the 14 pieces on this album are premiere recordings, so that would seem to confirm that their work has been largely forgotten. Those of you who know Akers’ work are aware that he prefers to play on period guitars or replicas; on this album he expertly wields a c. 1820 Saumier, along with a 2015 Panormo copy by James Cole, and a 2012 Stauffer copy by Scott Tremblay. All are expertly captured by engineer John Taylor.

All proceeds will go to the Arthur Mathews Organ Fund in aid of the Willis Organ at St. Mary’s. Refreshments are served during the interval. Information about tickets etc is here

Find out more about our services 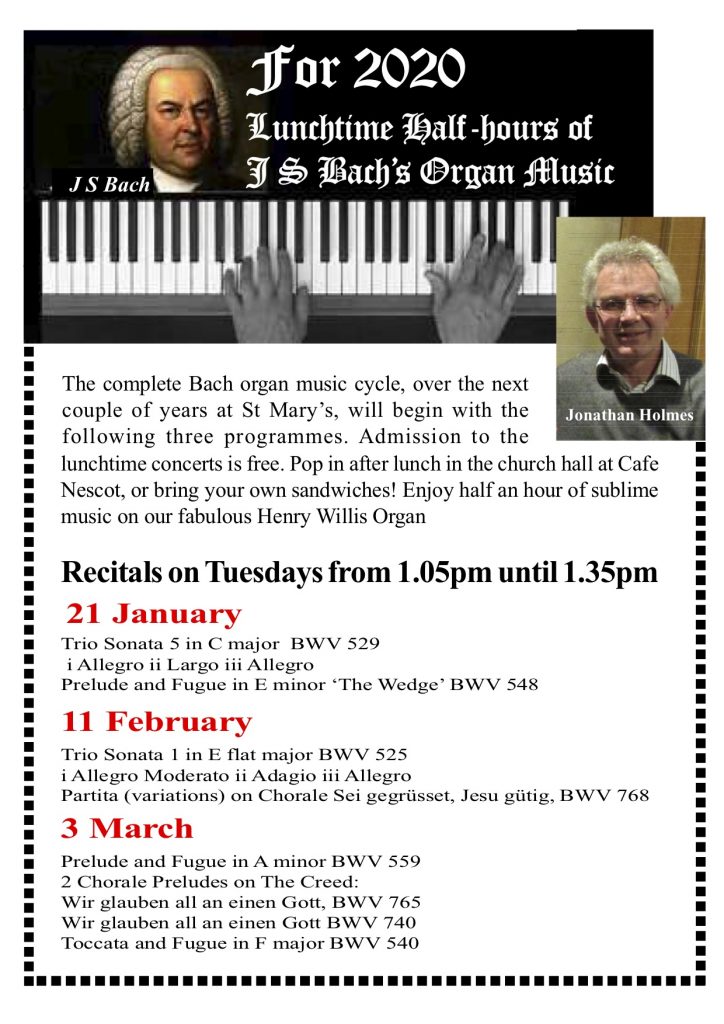 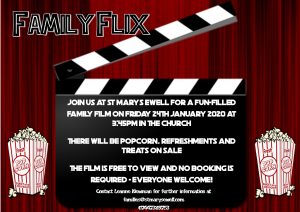 Free family film . Doors open at 3:45pm with the film commencing shortly afterwards. All welcome – ask for details about the film that is showing each month. Fore more information, contact Leanne Newman. If you’d like to come to this screening, please click on the Register button above or click on this link.
Jan
25
Sat
3:00 pm Board Games afternoon
Board Games afternoon
Jan 25 @ 3:00 pm – 5:00 pm 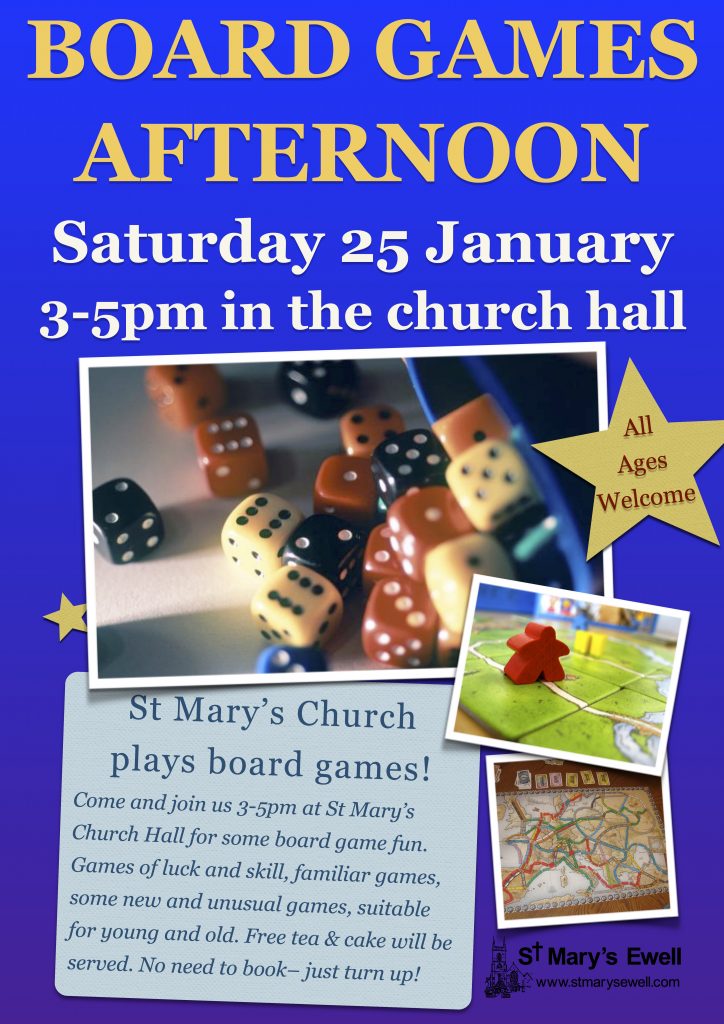 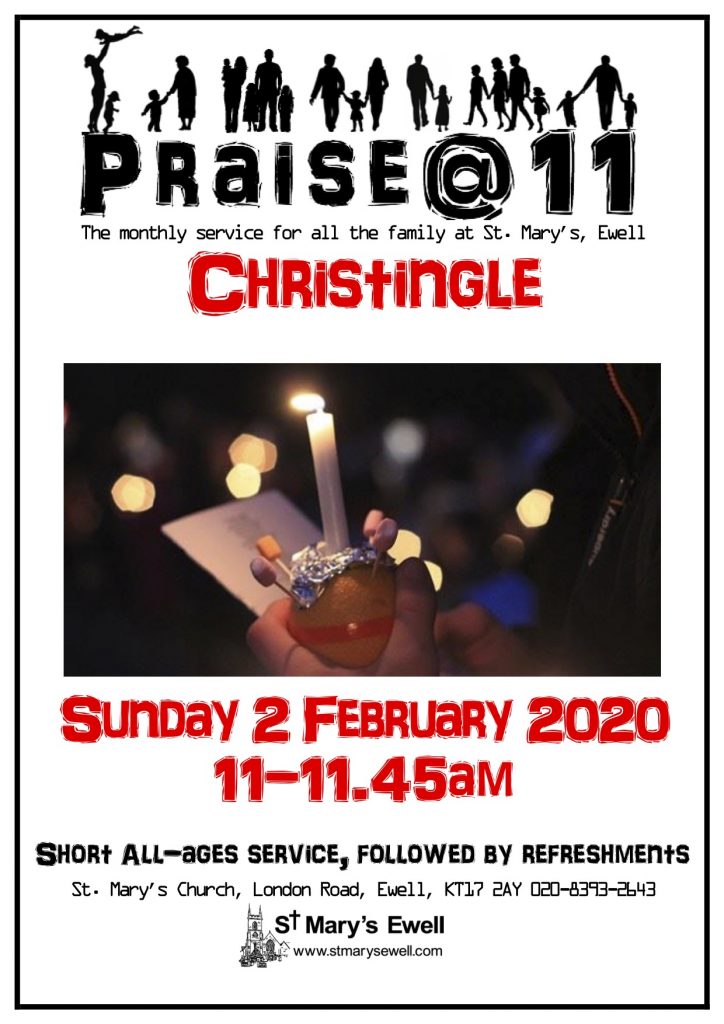 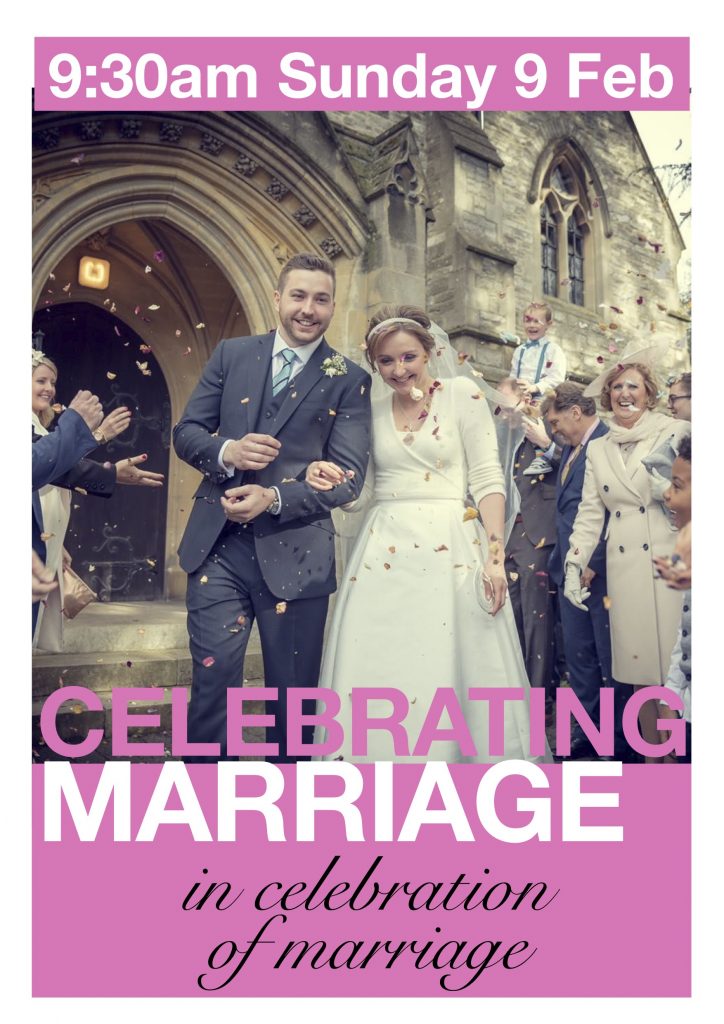 Each year we celebrate the role that St Mary’s is privileged to play in the ministry of marriage. All are very welcome. We send invitations to those who have been recently married at St Mary’s, and would love to welcome any others who have been married here, or anyone who wants to come along to a service celebrating the church’s role in marriage. The service is a Sung Eucharist which begins at 9:30am. There will be some favourite weddings hymns and music. This year there will also be a baptism as part of the service, from one of the families who were married here. The service is followed by special refreshments in church.
5:00 pm All-in – Love
All-in – Love
Feb 9 @ 5:00 pm – 6:00 pm 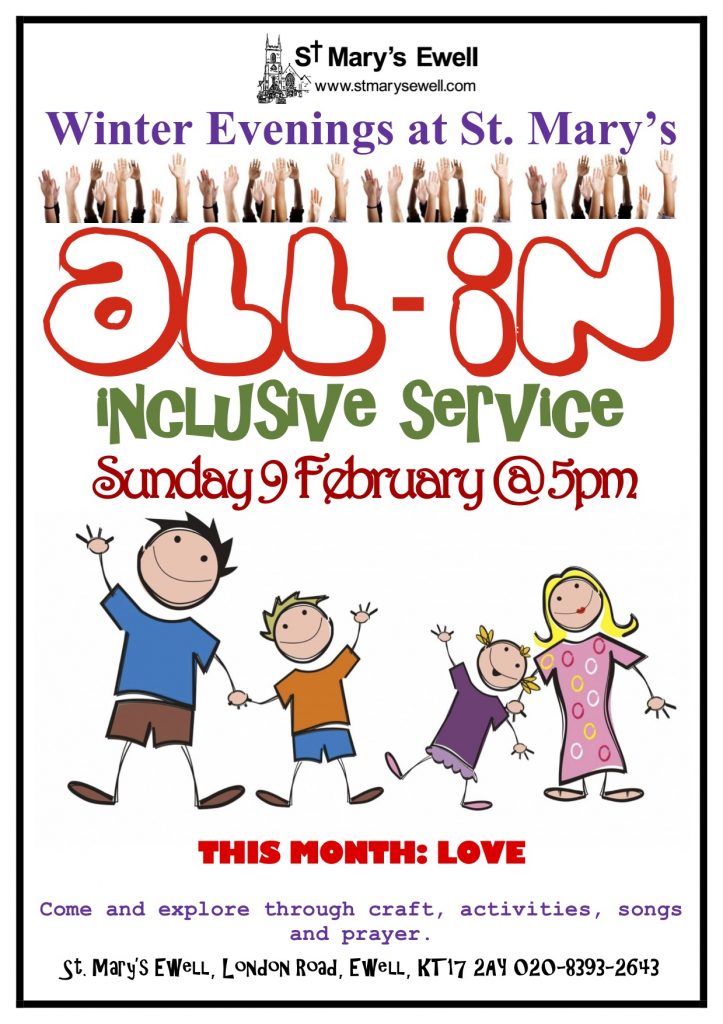 A family friendly service; incorporating craft, games, drama and live music. Come and have a drink with us at our service which allows everyone to worship in an informal way. Followed at 6pm by our new young youth group for 7-11s, Club Sandwich.
View Calendar