Affiliated to The Surrey Association of Church Bell Ringers and the Guildford Diocesan Guild (Leatherhead District).

It is certain that St Mary’s possessed bells, five in number, prior to the year 1548 when they are mentioned in an inventory of the Church’s possessions. These five bells hung in the Old Church, of which the tower is the only part still remaining.

In 1767 they were removed, taken to Whitechapel Bell Foundry, and recast into a ring of six with a total weight of 2 tons 11? cwt. Three of the six remain today in the existing ring of eight. One of the six had to be recast in 1830 due to the fact that it had become cracked. The six were transferred to the new church in 1848 and re-hung in the old frame with the old fittings.

By 1889, due to neglect and maltreatment, the bells and fittings were in a very bad state, two of the bells being cracked and a third seriously damaged. An estimate of the cost for setting the bells in order at that time was £114 – additional estimates for a new frame (£73) and two more treble bells (£83) made a total of £270. An appeal was launched on 28th December 1889. The work was completed in 1890, and the eventual bill was for £301-14s-4d. The first peal on the restored bells was rung on 26th December 1892, and took 2 hours 52 minutes.

Over the next 70 or so years the only major work was in 1935 when all the bells were re-hung on ball bearings by Gillett and Johnson of Croydon.

The bells were now eight in number, in the key of F sharp. At this stage the Tenor (the largest) weighed 14 cwt, and the smallest (Treble) 4? cwt. The total weight of all the bells was 3 tons 3cwt and 3 lbs. Each bell has an inscription showing who cast it; some show the date and the name of the Vicar and Churchwardens at the time. The inscriptions date from 1767.

Due to an unfavourable report on the bells in 1966, quotes for repair were obtained the following May saw the launch of an appeal as the Bells were once more in need of major overhaul, and the estimate of £2074 plus additional builders’ and carpenters’ work was received from the Whitechapel Foundry. The work required was:-

In 1969 Whitechapel Bell Foundry Ltd. was called in to put the bells once more in full working order, at an estimated cost of £2500. The main work was not on the bells themselves, but on the frame, the old oak bell frame being replaced by a new iron one to rest on new steel girders firmly grouted into the tower walls. The bells were removed in July 1970 and re-installed at Christmas 1970, after five months of silence.” The tenor is now only 12? cwts and the treble 4 cwts, total weight 2 tons 16? cwt.

A serious fire in the church in 1973 fortunately did little damage to the tower and ringing was only temporarily suspended for a few weeks.

The tower is built of brick with stone facing externally. It is about fourteen feet square internally, and some sixty feet high from ground level. There is a flat roof with decorative pinnacles at each corner. Access to the bells is via a staircase to the ringing chamber, with a steep staircase from there to the very low intermediate sound chamber added directly under the bells during the 1970 re-hanging. The frame is of cast iron on steel joists, and the whole installation has been generally trouble-free in the thirty years since. The provision of striking adjusters in the steel headstocks has proved to be very useful.

The clock is housed in the ringing chamber, and dates from 1799. Winding is by electric motors for chiming, striking and going, which replace the original hand-cranked mechanisms. When working, the chimes for the quarters would be struck on the two, three, four and seven, with the hours being struck on the tenor. There is no Ellacombe or similar chiming apparatus.

The original inscription on the seventh bell was retained when it was recast but not that on the tenor. This previously read:

It should be noted that one of the churchwardens changed between the casting of the new trebles and the recasting of the tenor in 1890 suggesting that they were done at different times.

Do you have some spare time you would like to fill up with a new experience? Have you recently retired or are you about to retire? Have you finished your exams at school and are looking for a new challenge? Perhaps you are housewife who would like to get out a bit more, meet some new people and try something different. 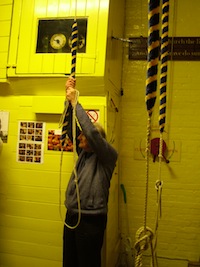 Why not give bell-ringing a try? Bell-ringing has nothing to do with strength or brute force. It is an art which requires a combination of listening, seeing and physical co-ordination. You will, I can promise, get an enormous amount of satisfaction when you have first managed to pull and properly control a bell. The next step, when you start into the mysteries of “change ringing” requires a certain amount a certain amount of mental dexterity but that comes a little later.

Bell-ringing, as we know it, started in England in the middle of the 17th Century. To continue this long tradition we obviously have to look for and welcome new recruits when- ever and wherever we can. At St. Mary’s, several who joined for the Millennium ringing have stayed to become very useful members of the band (that is what we call a team of ringers). Ringing is essentially a team business and as such, you will find it a very sociable activity.

So, if you want to make new friends, if you want to do something useful in the service of St Mary’s and you would like to give it a try, why not make one of your New Year Resolutions to GIVE IT A GO.

Just come up to the belfry one Tuesday evening at 7.30pm or contact our Tower Captain.